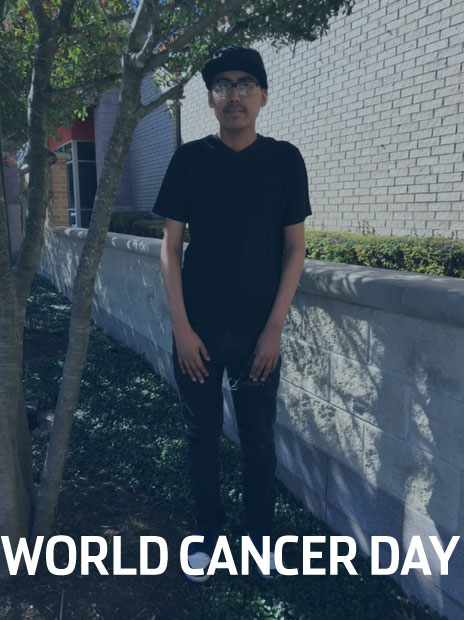 Danny is an incredibly active 14-year-old boy.  He’s been a member of his school’s basketball and football team and has run the Austin Half Marathon and other 10K races. But on March 6, 2016, as he was walking the 2-blocks from his school to his house, he was overcome with pain in his calves–so much so that he was forced to sit down on the curb to rest.

When he got home, he told his mom. He said he felt exhausted, and when she checked his temperature it read 102.3. She took him straight to his pediatrician’s office.

When they arrived, the doctor ran several tests, but couldn’t quite figure out what was wrong, so they were referred to Dell Children’s Medical Center. Within hours of arriving at Dell, doctors had run complete tests and figured it all out: Danny had cancer. B-Lymphoblastic Leukemia to be exact.

They rushed him into the Intensive Care Unit where he stayed for 5 days, receiving oxygen and several units of blood. Unfortunately, Danny has not been able to return to school since his diagnosis, and to date, he has received regular platelet transfusions and more than 10 blood transfusions.

But there is light at the end of the tunnel. Almost 11 months later, Danny is feeling MUCH better and is really looking forward to his return to school in the near future. Doctors estimate that he still has approximately 3 years of treatment ahead of him–and he’ll need many additional blood and platelet transfusions.

Danny is not alone. This Saturday, February 4th is World Cancer Day and stories like his are far too common. One of the best ways to directly help people with cancer is to become a blood donor. Danny’s mom told us, “I cannot express my gratitude to all donors and staff for giving Danny the gift of life. I will continue donating blood as a way to give back–and Danny’s sibling can’t wait to be 18-years-old so they too can become blood donors!”

Will you register to donate today? Battle of the Badges is back and even bigger in 2022. This year We Are Blood is proud to announce that the competition running between June 30th and July 9th to see who can donate more blood will be between the Austin Police Department, Austin Fire Department, Austin/Travis County EMS, Travis County Sherrif’s Office, & the City of Austin. You…