We work with dozens of wonderful local businesses every year. Whether they host blood drives, give in-kind gifts, financial gifts, help us spread the word about the local blood supply, or help us thank blood donors (or do all of those things!), we couldn't be more thankful to call such a wonderful community of businesses home. What sets out partners apart is they live by the same guiding principal that drives We Are Blood, to always ask themselves, "How does what I'm doing help 'our family' – meaning all Central Texans?" If we could give them all shout outs we would, but for now, here are a few of our amazing partners from the past year and what they did to help our Central Texas family.

It doesn’t get much more Austin than the Alamo Drafthouse. Since they started in an old parking garage down at 4th and Colorado in 1997, Austinites quickly picked up what the beer-and food-serving movie house was laying down, whether they’re showing first-run movies, having Quentin Tarantino show some of his personal movie collection, or screening Jaws to an audience floating in a lake. The Drafthouse now has 41 theaters across the US, but they still care a lot about their hometown, thanking donors with free movie passes every year. Just don’t talk or use your cell phone during the movie.

Austinites will remember the legendary days of seeing ice cream launched across four lanes of traffics on Guadalupe, into a cup on the other side. How amazing is the creamy goodness they’ve been producing since Amy Simmons opened up her first shop in 1984? For years, donors have looked forward to Amy’s thank-you to donors – a voucher for a free pint of cold, cold, creamy ice cream… in December. In addition, Amy’s employees come out in droves to their annual Phil Clay Memorial Blood Drive.

Blue Bell Creameries has been a family-held creamery operated out of Brenham since 1907. For over 20 of those years, they’ve quietly delivered hundreds of pints of ice cream to We Are Blood for donors. Bonus: since this happens in August, and most people don’t have freezers in their cars, it’s fun to watch people take down entire pints of Blue Bell after donating…possibly the best brain freeze you will ever get.

In honor of National Blood Donor Month in January, Franklin BBQ partnered with We Are Blood to say a big thank you to blood donors. Lucky donors and their plus ones have been treated to a private Franklin BBQ dinner. No line, tons of brisket, and even more great company. Aaron Franklin also helped us get the word out by making a video promoting the event. Look for this partnership to continue into the future!

It’s about time someone brought fresh, all-natural beef and chicken, fresh-cut fries from natural potatoes, and milkshakes, yummy milkshakes, all made in a clean kitchen, by folks taken care of by the business, to a burger drive-through. Actually, July 5, 2005, was about that time, when Kathy and Patrick Terry opened the first P. Terry’s burger stand not too far from Austin’s Barton Springs. Milkshakes, did we mention the milkshakes? P. Terry’s has thanked donors periodically with free milkshakes, and even free burgers.

Quickly making their way to being an Austin beer & food icon is Pinthouse Pizza. In their first four years, they’ve garnered stacks on stacks on stacks of national awards, including taking the prize in our first two annual Beer Positive Brewery Challenge. Their Electric Jellyfish IPA is a local phenomenon! Rumor has it that at ACL Fest in 2019, the beer tent went through a keg every 24 minutes, on average. In addition to some of the best beer around, and great pizza at their three (soon to be four) locations, their motto is “doing good in the neighborhood,” and they’ve done a lot of good for We Are Blood and our donors, with fundraisers and free pizzas for donors every year over Thanksgiving week. We promise that it’s sheer luck that their Burnet and Round Rock locations are a stone’s throw of two of our donor centers.

It’s just right that Central Texas’ minor-league baseball team, the Round Rock Express, is named after the “Ryan Express”. The Texas-born Hall of Fame pitcher Nolan Ryan, still the all-time leader in strikeouts. The Astros affiliate holds seven division titles, three conference titles, and a league title, and a beloved piece of our sports culture. Nolan and his son, Reid, are two of the three owners, bringing a genuine family feel to the organization, which shows in their community involvement, including their support of We Are Blood, hosting groups of our donors for games and most recently the Express stepped up in a big way to host a blood drive during the Covid-19 pandemic. It is great to rely on neighbors like them. Look for our big, pretty sign in the concourse behind home plate when you get up for that hot dog

The St. David’s Foundation is a longstanding member of the We Are Blood family. If you have been on one of our mobile blood donation buses or stepped into our main blood donation center, it’s because of St. David’s Foundation’s generosity. Their investments in the health of our community blood supply help us every single day in ensuring that all Central Texans have access to life-saving blood when they need it.

In 2019, a large mobile drive fell through just days out, which would have caused a significant hit to our community’s blood donations. It just took an email, and TacoDeli said, “let’s do one at our Crestview location.”

If you’re donating at our Lamar location in the morning, there is really no reason you shouldn’t cross the street to get some delicious tacos (as well as salads that won’t make you sad about your lunch choices).

Thundercloud has been serving up fresh, fast, and healthy sammiches, and putting their values to work for the community, since 1975. The most obvious is certainly the Thundercloud Subs Turkey Trot. Held every Thanksgiving since 1991, the five-mile tradition now fills the streets with over 20,000 runners, and has raised over $3.8 million for Caritas of Austin, which supports people experiencing poverty and homelessness. For years now, they’ve thanked folks who show up to donate blood and platelets with a free sub. Try the Big Paul. Or the meatball sub. Or the Veggie Delite, with hummus. Okay, they’re all good.

Another Austin taco legend since soon after it was born in a red trailer in 2006, Torchy’s steps up tacos into the creative and indulgent range, with things like their Fried Avocado taco, the option to make something “trashy” by adding their amazing queso, and their annual Some Like It Hot celebration of gastrointestinal scorching, with offerings like the ghost pepper-infused Scalding Pig. They’ve taken their wackiness and commitment to “Damn Good Tacos” to four other states, EVEN Oklahoma, and have a giant black truck that looks like it’s ready to run tacos down Fury Road after the apocalypse. And, during critical times for our blood donations, they thank folks for donating with some of that tortilla-wrapped goodness.

We’d like to thank the incredible folks at Union Pacific Foundation for providing us with a generous grant dedicated to helping members of our communities battling COVID-19. The grant has allowed us to greatly grow our convalescent plasma program and continue to supply our Central Texas hospitals with the resources they need to save lives. For over 150 years Union Pacific has been dedicated to Building America. Through their foundation, they are committed to the advancement of public safety, workforce development, and Covid-19 relief for local communities.

When you have conversations about Texas and Texas icons, Whataburger is inevitably brought up. The two go hand in hand. So good, even their ketchup is legendary. Harmon Dobson launched the very first Whataburger in 1950 in Corpus Christi, TX and they are still family-owned and operated today! Whataburger is beloved right here in Central Texas and they give back to our community big time! During the COVID-19 pandemic, Whataburger has donated legendary Whataburger burgers to our blood donors and hosted numerous mobile blood drive buses in their parking lots. We’re proud to have the Whataburger family as a part of the We Are Blood family!

Located in Blanco, is the Real Ale brewery and distillery actually a few miles outside of our service area? Maybe not. But maybe. But we love them and the great beer they’ve been producing for over 20 years, making them one of the first great breweries of the modern era of Central Texas breweries. And, they love us, inviting us to all their anniversary parties, and the very hilly, but very fun Real Ale Bike Ride every year.

Twice named the Best Large Brewpub at the Great American Beer Festival, when the folks at ABGB aren’t giving their all to brewing great gold-medal-winning beers, they’re giving their all to organizations like Austin Pets Alive!, the SIMS Foundation, and other great local causes, much of it through their Hell Yes! Project. ABGB has also been a friend to We Are Blood and our donors, partly because they were personally impacted by the passing from cancer of Carlo Longino, a patron that was dear and well-known there, and whose picture still hangs at stage right. For them, that drove home how important a resource our blood supply is They’ve held blood drives, thanked donors with their giant, fantastic slices of pizza, and consistently invite us to events to spread the word about blood donation.

A look at national beer awards every year will tell you that some of the best breweries in the country are right here in Central Texas. While we could go on naming the couple dozen of those local breweries that have said, “here, hold my beer” to help the community blood supply, it would fill an entire website. From Austin Beerworks’ Bloodwork Bash, celebrating their delicious Bloodwork Orange IPA, and blood donation, to folks from places like Desert Door, St. Elmo, Southern Heights, Black Star Co-Op, Live Oak, Lazarus, and other breweries rolling up their sleeves every year as they participate in our Beer Positive Brewery Challenge, our beer community always comes through for us. 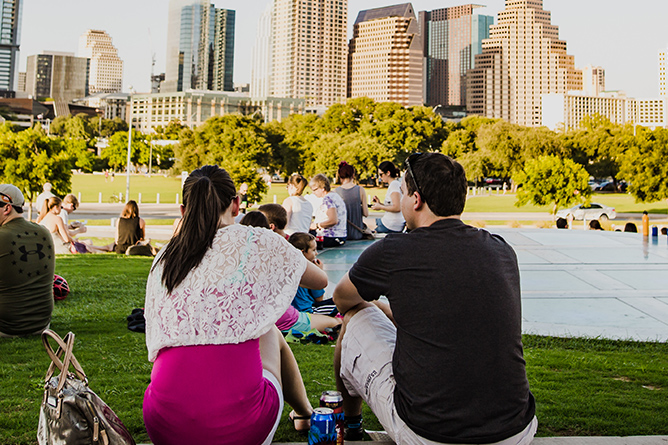 Our name has changed, but our mission never will.